In 1883, the small town of St. Augustine had no idea that its future was going to be radically changed when a particular famous tourist arrived on his honeymoon with his second wife. Henry Flagler fell in love with the sleepy fishing village and saw in it great potential to be a tourist mecca. He believed that he could make St. Augustine the “Newport of the South,” a place for wealthy New England and New York elites to warm themselves in Florida’s subtropical air during harsh, cold winters.

Henry Flagler purchased five acres of salt marshland near the center of town.  He hired two young architects, John Carrere and Thomas Hastings, from New York City to create a grand resort on an epic scale. They designed a Spanish Renaissance-style hotel to cater to the wealthy and well-heeled. The guest list was a virtual who’s who of American society, that included such luminaries as J. P Morgan, Andrew Carnegie, Joseph Pulitzer, Babe Zaharias, and Presidents Warren G. Harding, Grover Cleveland, and Teddy Roosevelt. This hotel, the Ponce de Leon, became one of the most famous hotels of the Gilded Age. 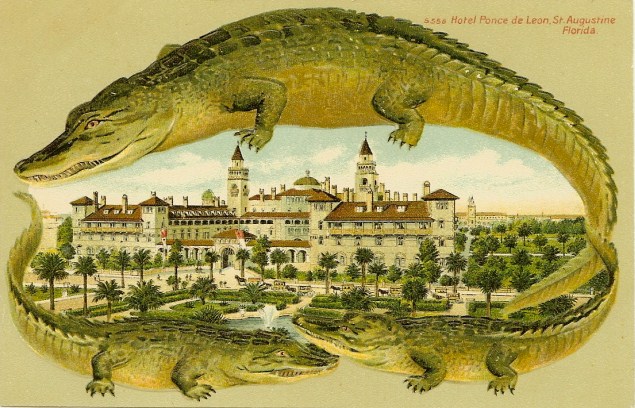 Postcard from the Ponce de Leon Hotel in St. Augustine, Florida, circa 1909

Flagler brought construction material for the hotel in on trains which ran on his new railroad, the Florida East Coast Railroad. The Ponce de Leon was one of the first poured concrete buildings in the world. Thomas Edison personally supervised the installation of electricity from the ground up. His Electric Light Company provided four coal-powered generators to provide electrical power for the hotel’s four thousand light bulbs. Louis Comfort Tiffany provided stained glass windows and acted as an interior design consultant.

The hotel opened for business on January 10, 1886.  A small cannon was fired at 3 pm followed by the orchestra playing the Star-Spangled Banner.  The hotel had luxuries and adventures unheard of at the time. Guests could enjoy tennis, gardens, billiards, outings, feasts, and other diversions. It even had a bicycle school so that guests, both men, and women, could learn how to ride the new invention sweeping the country. Another important part of the social life at the hotel was the artist studios. Henry Flagler handpicked artists to reside at the hotel and gave them individual studios. Artists like Felix de Crano, Martin Johnson Heade, Frank Henry Shapleigh, and Arthur Vidal Diehl were just some of the famous artists working out of the hotel. On Friday nights, the hotel held artist receptions so that the guests could wander from studio to studio. The artists typically created small oils and watercolors so that they could be purchased and easily transported home by the hotel patrons. 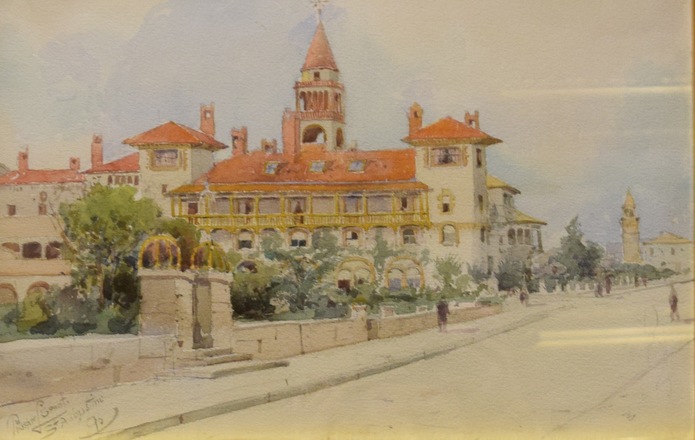 On display in the Cici and Hyatt Brown Museum of Art witin the permanent gallery is a wonderful watercolor landscape of the Ponce de Leon Hotel, c. 1896, painted by Louis Prosper Senat (1853-1925). It is one of the earliest known watercolor paintings of the hotel. Senat was born into a wealthy family in Germantown, Pennsylvania. He studied in Paris and traveled and painted all over Europe. He typically worked in oil and watercolor and was a skilled master of both.  He specialized in topographical landscapes and seascapes. Senat exhibited his work all over the United States and across the world.

In Senat’s elegant watercolor of the Ponce de Leon Hotel, he accurately depicts the hotel in its prime. This brightly lit street scene shows the massive architectural masterpiece as if standing from across the street. The hotel building takes up the entire work and the vibrant colors show the roof contrasting with the pale walls. The iconic tower, actually a water tower, soars above the roof. Green tropical palms run the length of the building and indiscriminate people walk down the streets. Today, the hotel houses Flagler College, a private liberal arts institution enrolling roughly 2,500 students.  To this day, students dine in the cafeteria under Tiffany’s masterful stained-glass windows.