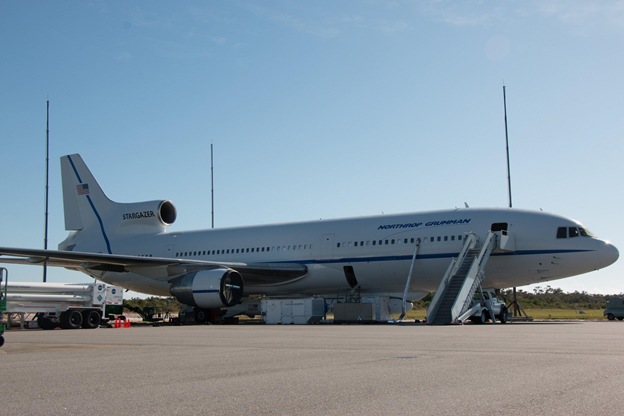 On November 2nd, I had the opportunity to participate in a media event for the launch of the ICON spacecraft at the Kennedy Space Center in Cape Canaveral. During a two-year mission, the Ionospheric Connection Explorer (ICON) will study the frontier of space: the dynamic zone, high in our atmosphere, where Earth’s weather meets space weather. In this region, the thin gases at the edge of space swirl in giant winds. By investigating this region, we will improve our global communication abilities. Additionally, we will better safeguard our space assets, such as astronauts and other vital satellites. 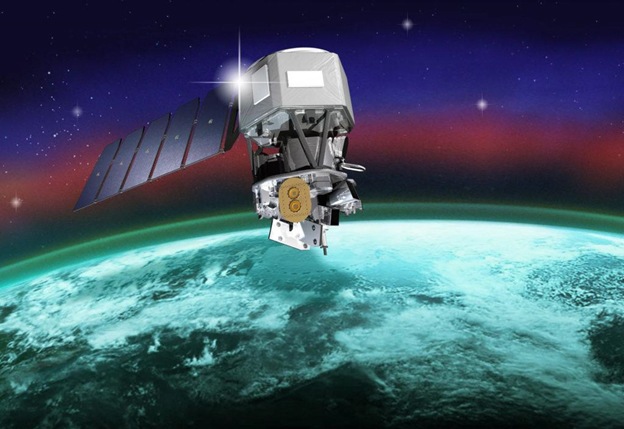 This illustration depicts NASA’s Ionospheric Connection Explorer, or ICON, a satellite that will study the frontier of space: the dynamic zone high in our atmosphere where terrestrial weather from below meets space weather from above. Image credit: NASA

While the big, ground-based launches from Cape Canaveral usually garner the most attention, a lesser known, but highly reliable air-based type of launch has been conducted by Northrop Grumman since 1990. The Pegasus rocket was developed to provide cost-effective access to space for the small satellite community. The current three-stage Pegasus XL boosts small satellites (in this case, the vending machine-sized ICON) into low Earth orbit. The rocket is ferried aloft by an L-1011 carrier aircraft to approximately 39,000 feet over open ocean, where it is released into free fall for five seconds before igniting its first stage rocket motor. A typical Pegasus mission delivers the payload into orbit in about 10 minutes. With 43 missions and a perfect launch record since 1996, Pegasus has been a steady workhorse for the space industry. 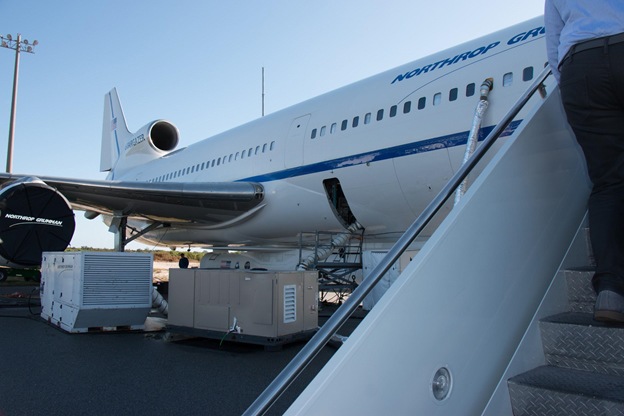 Attached to the belly of the plane is a partially (and intentionally, I believe,) obscured Pegasus XL rocket,
containing the ICON spacecraft. Image credit: Jason Schreiner/MOAS

Attending this event was a unique experience. It was the most restrictive, high-security launch event I’ve attended so far. We sixteen media members in attendance received briefings from five different people, including NASA personnel, Northrop Grumman employees, and military representatives to reiterate their restrictions on what we could and could not do. 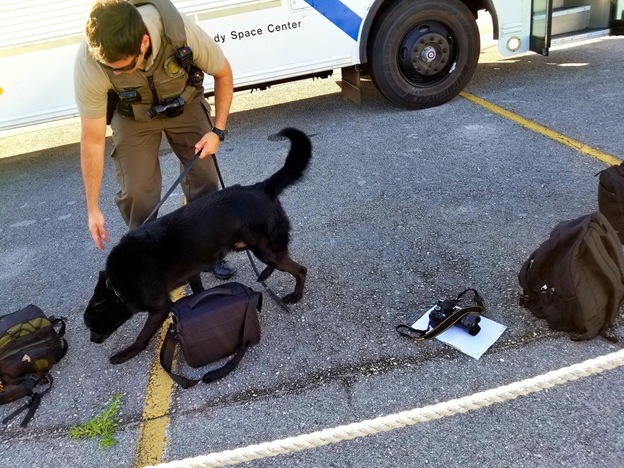 As we would be in close proximity of a rocket, our bags and photography equipment needed a sniff from a K-9 unit to check for explosives before riding the transport bus to the runway. Luckily, we all passed the test. Image credit: Jason Schreiner/MOAS

Once we arrived at the runway, we were not permitted to take pictures of any buildings, nor any pictures of the extended runway itself to maintain a level of partial secrecy for the exact location of the aircraft and spacecraft to any person with nefarious intentions. We were prohibited from carrying any object that transmitted a signal, such as cell phones, key fobs, or smart watches to prevent unwanted electronic communication with ICON. We were cautioned that if anyone strayed outside the designated area or made an aggressive move towards the rocket, we would be, “Tackled by armed military members...at the very least.” This was serious business. It was made clear that they were doing us a favor by permitting a media presence. Onboard the plane, each person was allotted about 60 seconds to take photographs of only the cockpit. 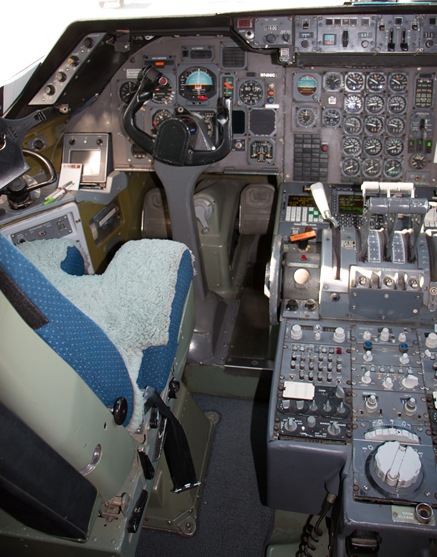 We were not allowed to take pictures of any of the scientific equipment in the cabin. Disappointing, yes, but understandable when you consider the proprietary and military secrets involved in a rocket launch. 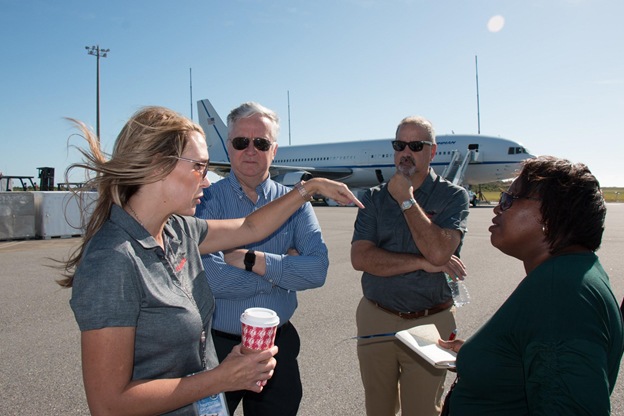 After some barely less-than-perfect preflight checks, ICON’s launch was postponed. Once the current investigation is complete, the launch is expected shortly after, probably within the next few weeks.

It has been an eventful time for space exploration. Let’s check in on other space news:

These two views from NASA's Curiosity rover, acquired specifically to measure the amount of dust inside Gale Crater,
show that dust had increased over three days from a major Martian dust storm. Image credit: NASA/JPL-Caltech/MSSS

Once the dust gets moving, it tends to stay moving and the system grows. Unfortunately, the storm has likely claimed a casualty, the Opportunity rover. 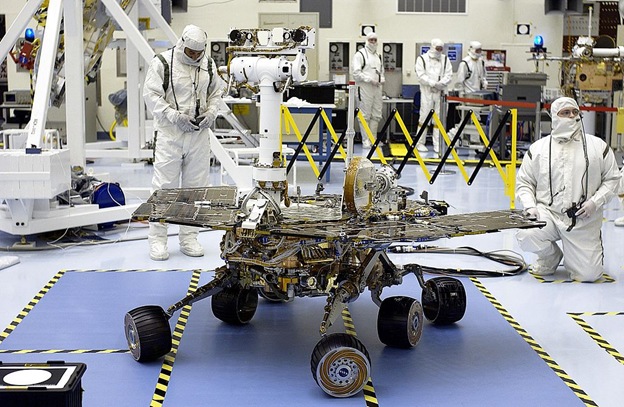 Landed in 2004, Opportunity was only intended for a mission duration of 92 days. Instead, the tenacious little rover exceeded all expectations to run for 5,250 days before losing contact on June 10th. In preparation for the storm, Opportunity was entered into power-save mode, with the hope of re-establishing contact afterward. However, with the solar panels likely caked in red dust and incapable of receiving energy from the Sun, NASA has been unable to acquire a return signal. Post-storm wind still rages and may yet clean the solar panels, but for now, it appears that Opportunity has bitten the dust.

Opportunity panorama taken on the rim of Erebus Crater. The rover's solar panels are seen on the lower half (December 5, 2005).
Image credit: NASA/JPL-Caltech/Cornell

The newer Curiosity rover, however, has endured the dust storm. Using a radioisotope thermoelectric generator, Curiosity continues to operate under its own nuclear power. 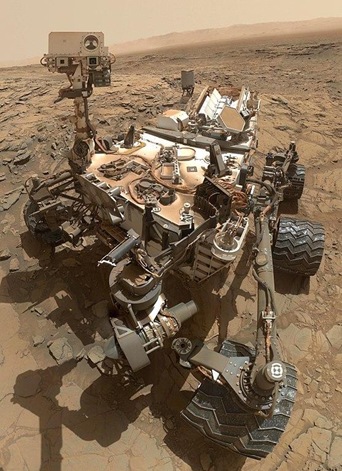 This self-portrait of NASA's Curiosity Mars rover shows the vehicle at the "Big Sky" site, where its drill collected
the mission's fifth sample of Mount Sharp. Image credit:  NASA

With Opportunity apparently at an end, NASA’s Mars team will turn its attention to upcoming missions: InSight and the Mars 2020 rover. Launched in May, InSight will land on Mars in just a few days - November 26th, 2018 - to study its deep interior. We will be watching the momentous event live in the Planetarium!  See here for more details:  /Mars-InSight-Landing-7-282.html 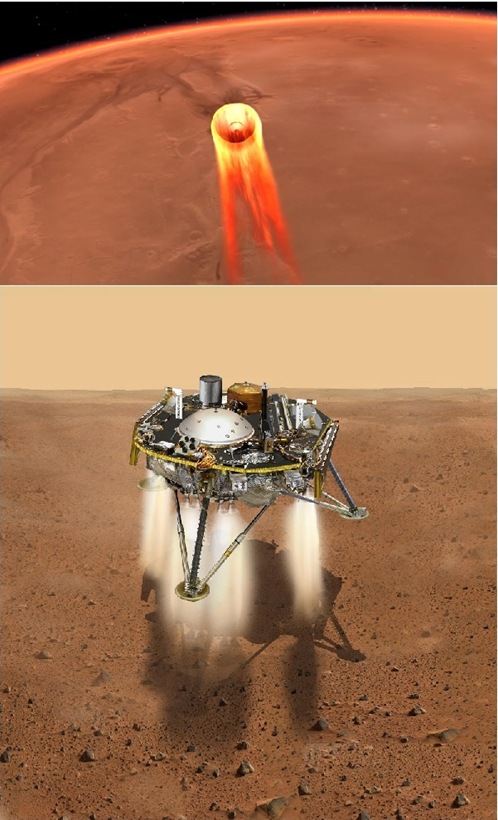 Meanwhile, the next generation rover, the to-be-renamed Mars 2020 continues production and testing.  Modeled after Curiosity, the rover will be a large step toward a human presence on Mars.  2020 is specifically designed to search for signs of past life, as well as investigate potentially habitable areas for future astronauts. Among the more exciting aspects of the mission is the participation in the first stage of a Mars sample return (MSR). 2020 would prepare and store surface samples, while a later mission would retrieve and launch them back to Earth for a full study. Perhaps the most exciting aspect of the mission is the accompanying Mars Helicopter Scout (MHS), a small drone that would fly ahead of the rover to determine the best driving route! 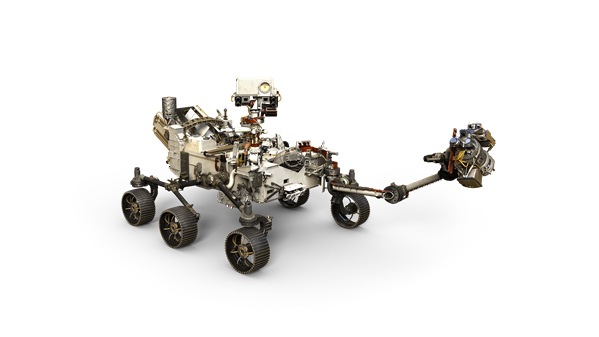 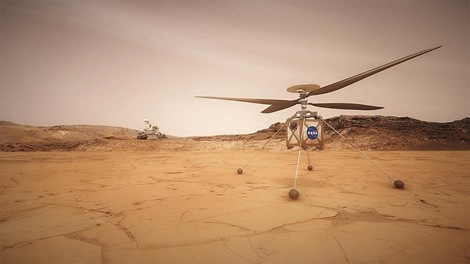 Mars 2020 and the MHS, a 4 lb, solar powered, an autonomous flyer which will plot a course and demonstrate
the viability of heavier-than-air vehicles in Mars’ thin atmosphere. Image credit: NASA/JPL

Just today (November 19th), NASA announced the landing site: Jezero Crater, a “...geologically rich terrain, with landforms reaching as far back as 3.6 billion years old, that could potentially answer important questions in planetary evolution and astrobiology,” said Thomas Zurbuchen, associate administrator for NASA’s Science Mission Directorate. “Getting samples from this unique area will revolutionize how we think about Mars and its ability to harbor life.” Jezero Crater is located on the western edge of Isidis Planitia, a giant impact basin just north of the Martian equator. 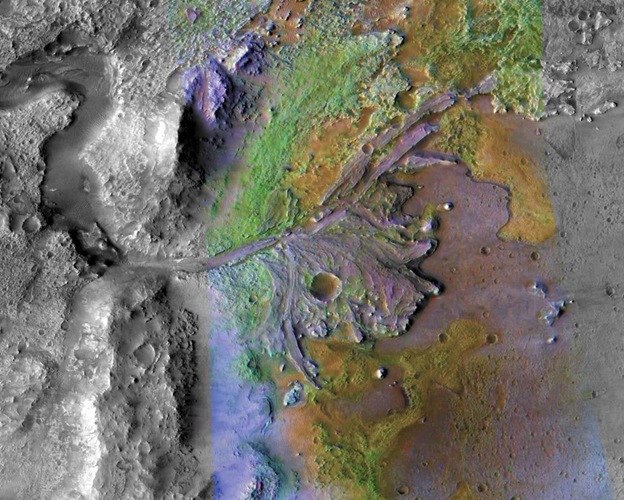 On ancient Mars, water-carved channels and transported sediments to form fans and deltas within lake basins. Examination of spectral data acquired from orbit shows that some of these sediments have minerals that indicate chemical alteration by water.
Here in Jezero Crater delta, sediments contain clays and carbonates. The image combines information from two instruments on NASA's Mars Reconnaissance Orbiter, the Compact Reconnaissance Imaging Spectrometer for Mars and the Context Camera.
Credits: NASA/JPL-Caltech/MSSS/JHU-APL

After more than nine years in deep space, collecting data that indicate our sky to be filled with billions of hidden planets – more planets even than stars – NASA’s Kepler space telescope has run out of fuel needed for further science operations. On October 30, 2018, NASA decided to retire the spacecraft within its current, safe orbit, away from Earth. Kepler leaves a legacy of more than 2,600 planet discoveries from outside our solar system, many of which could be promising places for life. 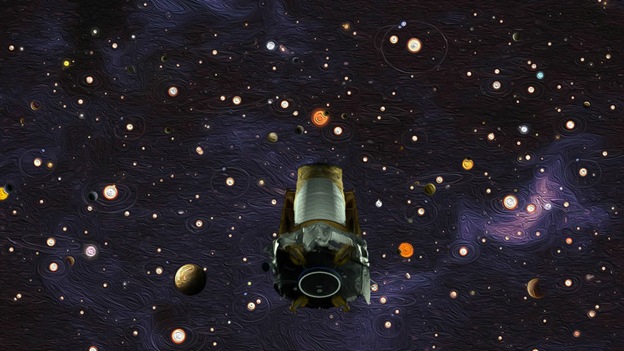 This illustration depicts NASA's exoplanet hunter, the Kepler space telescope. Kepler has opened our eyes to the diversity of planets that exist in our galaxy. The most recent analysis of Kepler’s discoveries concludes that 20 to 50 percent of the stars visible in the night sky are likely to have small, possibly rocky, planets similar in size to Earth, and located within the habitable zone of their parent stars.
That means they’re located at distances from their parent stars where liquid water – a vital ingredient to life as we know it – might pool on the planet surface. Credits: NASA/Wendy Stenzel/Daniel Rutter

The OSIRIS-REx spacecraft will initiate an intricate dance with asteroid Bennu on December 3rd, mapping and studying it in preparation for sample collection in July 2020. OSIRIS-REx will deliver the sample to Earth in September 2023. 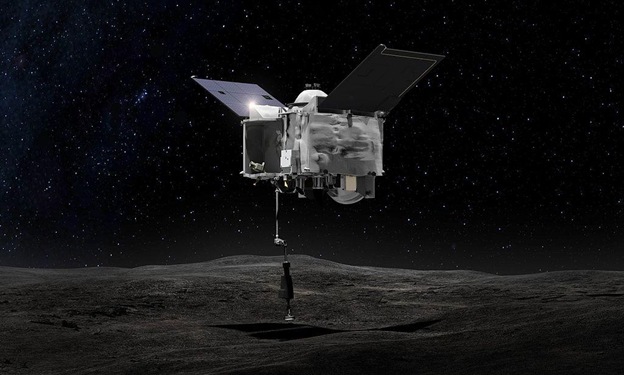 New Horizons will fly by its next target, nicknamed Ultima Thule, on New Year’s Day, 2019, approximately four billion miles from Earth - the farthest space probe flyby in history. This Kuiper Belt encounter at the outer reaches of the solar system complements the discoveries still coming from the mission’s July 2015 exploration of Pluto. However, this time, the spacecraft will come within one-third of the distance to Ultima than it did with Pluto. 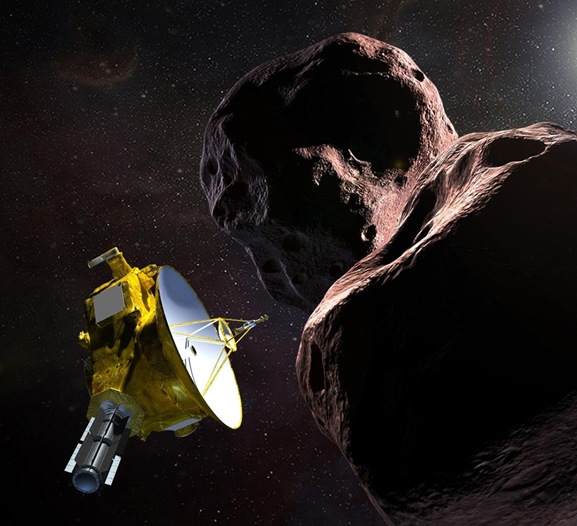 Whew, that was a lot. Come back next month for Space News (Volume 2), when we will check the status of the Parker Solar Probe (/Good-Speed--Parker-Solar-Probe--1-50.html) and the just-retired Dawn spacecraft, find out what went wrong with the Soyuz rocket launch abort and our astronauts in October, review the progress of NASA’s Space Launch System (SLS) and The James Webb Space Telescope (JWST), and investigate SpaceX’s continuing expansion, space tourism, and discover the location of Starman!