What is an extinction event? Most people do not realize that paleontologists and scientists have created certain criteria for extinction events. These events are characterized by a sharp change in the abundance of multi-cellular organisms and a widespread decrease in the Earth’s biodiversity. Most of the diversity and biomass on Earth is microbial and difficult to measure so these events are limited to easily observable biologically complex components of the biosphere.

Scientists have established three criteria for a major extinction event. The first is that the event must be worldwide. Animals must be affected over the entire globe not just regionally. Second, an extinction event must happen very quickly in a short geologic time scale. Finally, one-third of all existing species must disappear. What is remarkable is that after these catastrophic events new life, new species, and new ecosystems emerge to fill the void very quickly. 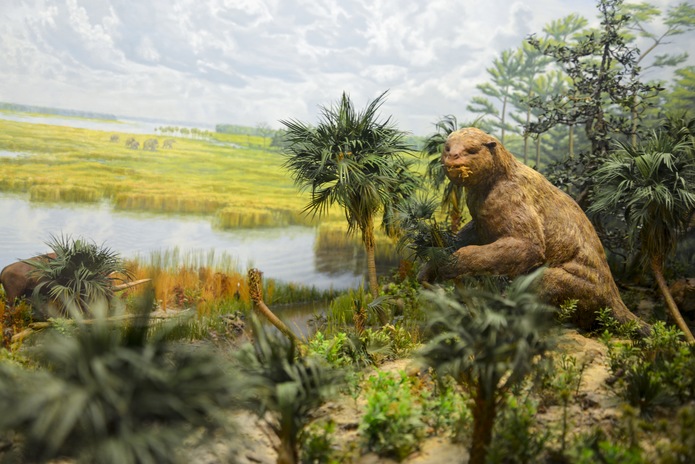 A diorama representing the habitat of a prehistoric Eremotherium laurillardi (Giant Ground Sloth).

Fast forward to 13,000 years ago and what are the theories that explain why the ice age animals went extinct? What was different during the Pleistocene Epoch when giant sloths, giant armadillos, and huge cave bears dominated places like Florida? Most of the animals that perished at the end of the last ice age were called the megafauna or animals over 100 pounds. Huge multi-ton animals like mastodons and mammoths disappeared along with apex predators like saber-toothed tigers and dire wolves. Most of these ice age animals had endured at least 12 previous ice ages and did not go extinct. Why was this one different? Scientists have grappled with this question for over 150 years. Scientists have developed four scientific theories to address this conundrum.

The first theory, championed by Geoscientist Dr. Paul Martin at the University of Arizona, is called the Blitzkrieg or overkill theory. Dr. Martin posits this disappearance of the megafauna was due to a new devastating apex predator that could problem solve, throw objects like spears, and make weapons. Obviously, he is referring to humans. Wherever humans came into new lands, corresponding extinction of large land animals occurred shortly afterward. In North America, a group of humans called the Clovis people arrived about 12,000 years ago. These prehistoric people received their name after the large spear points they made which were first discovered in New Mexico. They used these large blades in conjunction with a unique tool called the atlatl. This tool enabled them to catapult a spear at high velocity and over a long distance to bring down slow-moving mammoths and other megafauna. In a short time span, these animals were hunted to extinction. This created a domino effect as the other carnivores that hunted them fell by the wayside. Eventually, a new equilibrium was established in the ecosystem. 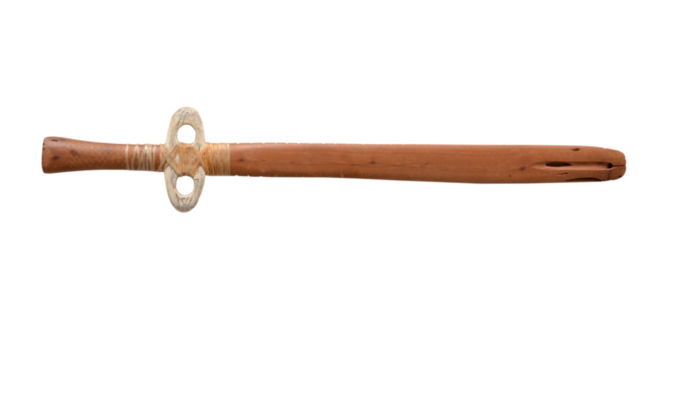 The atlatl is a paleo carved wooden tool used to launch a spear at a high velocity to
bring down large mammals such as mammoths. (Replica) ca. 10,000 before present.

In a short 1,000-year span, the Clovis people spread from Alaska to the tip of South America. For unknown reasons, they disappeared, and scientists theorize they became the major aboriginal tribes of North and South America. The Museum has evidence of these Clovis People at work. In a case within the Prehistory of Florida Gallery at MOAS sits the skull of a Florida bison. If you look closely, you can observe what appears to be a small rock sticking out from the top of the skull. This is no rock, but a broken piece of the spear point that delivered the deathblow to the animal. The skull was found in the muck of the Aucilla River in North Florida. It is carbon dated at 12,000 years old – the right time for the Clovis people in Florida. This proves that these ancient people were hunting large megafauna.

Other “kill sites” have been found at Silver and Wakulla Springs, and other sites throughout the continent. Even the Daytona Mastodon excavated in 2011 by museum staff has rib bones with what appear to be butcher marks. These bones were sent to experts at the University of Indiana and China but came back as undetermined.

This bison skull dating back 12,000 years was discovered in the Aucilla River east of
Tallahassee by a University of Florida paleontological team in the mid-1990s.

Populations of big animals seemed to radically decrease everywhere when humans first appear in their ecosystem. 3,500 years ago in Cuba, a smaller species of giant ground sloth went extinct. 46,000 years ago, in Australia, large animals like the giant kangaroo became extinct when humans arrived. It is the same story in Europe, Madagascar, and New Guinea. What about Africa? The large animals there seemed to have survived just fine. Scientists who prescribe to the “overkill” theory suggest this may be explained by the fact humans and large animals coevolved and existed together for a long time. The large megafauna animals on the continent avoided the dangers of these bipedal predators. When humans crossed over land bridges to new continents and islands, existing animals had no clue to be wary. Many large animals like elephants and mammoths have slow reproduction rates making it difficult to keep the birth rate higher than the death rate therefore compounding the problem. 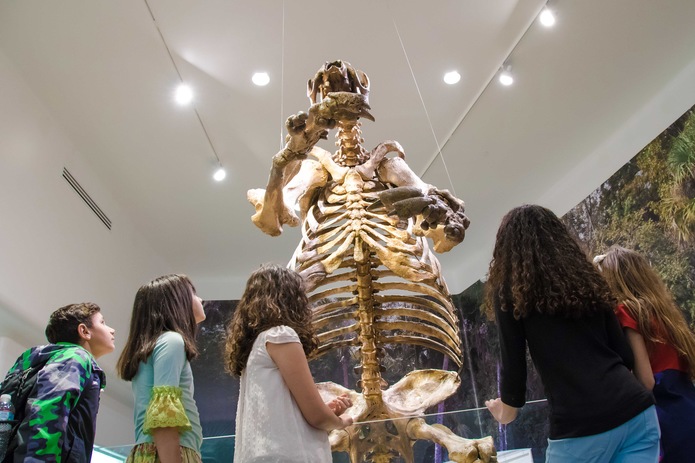 When the climate changed at the end of the last ice age, warmer temperatures raised sea levels; this especially affected Florida. The coastline was no longer 50 miles further east from Daytona or 150 miles further west from St. Petersburg than it is today. Many scientists believe that the climate changed quickly and the grasses changed as well. Research from the University of Copenhagen suggested that at the end of the last ice age a change in the grasses resulted in their decline. These grasses changed from what was called C-3 to C-4 grasses, which contain more silica and were far less nutritious. Thus, the animals were not getting the right type of food. This environmental change in vegetation led to their downfall.

Another environmental effect at the end of the last ice age was the retreat of the ice sheet. The large ice sheet that blanketed North America and Europe kept the seasons dampened, but as it retreated, it caused sharply defined seasons of winter and summer. This caused the animals to move to new ecological zones and adapt. New plants and terrain caused by sharp seasons in summer and winter created a new balance in the ecosystem. If you could not adapt, you died off.

The demise of the woolly mammoth could teach us much about our effect on other species. Image Credit: George Teichmann

The next theory is that a hyper disease spread swept through the megafauna. Perhaps, early human aboriginals moving into new lands carried a disease. It has happened many times before were a disease jumps from one species to another.  Cases of swine and bird flu are modern examples of this effect. What if humans or the wild dogs that followed them carried a virus in their gut which affected large mammal populations. Unfortunately, there is not much direct evidence to support the claims of the small number of scientists who are working on this theory.

The final theory, which was just released in the fall of 2019, suggested a visitor from outer space wiped out the large mammals of the world. Researchers have just published evidence suggesting that asteroids impacted near Elgin, South Carolina, and Greenland about 13,000 years ago. Researchers at the University of South Carolina have detected above-normal amounts of iridium and platinum, which could only have come from such an impact. This could cause a mini ice age, which today is called the Younger Dryas event, which was a temporary return to ice age conditions 13,000 years to 11,700 years ago. This was an aberration in the general warming trends of the period.

Although the last ice age was not a major extinction event, roughly 35 different types of large mammals went extinct. Did humans cause the extinction or perhaps a combination of environmental changes and hunting working together rubbed out the ice age mammals? One of the problems is that the evidence paleontologist and scientists collect is rarely complete. Whatever the reason or reasons, large animals were unable to adapt to whatever changes happened at the end of the Pleistocene Epoch. Scientists just cannot seem to put a “bulls-eye” on any single event causing this mini extinction event.