What the heck is going on with Betelgeuse?  The star with the fun name is doing some strange things.

For thousands of years, the shoulder star of the constellation Orion has burned as one of the brightest in Earth’s night sky.  Over the past few weeks, however, Betelgeuse started to noticeably and rapidly dim.  Astronomers around the world have turned their telescopes towards the red supergiant Betelgeuse to make observations and perhaps understand more about stellar dynamics.  By December, the star’s luminosity (or brightness) had dropped significantly, by a factor of 2.5.  This has knocked Betelgeuse out of the top ten brightest stars and landed it somewhere within the top thirty. 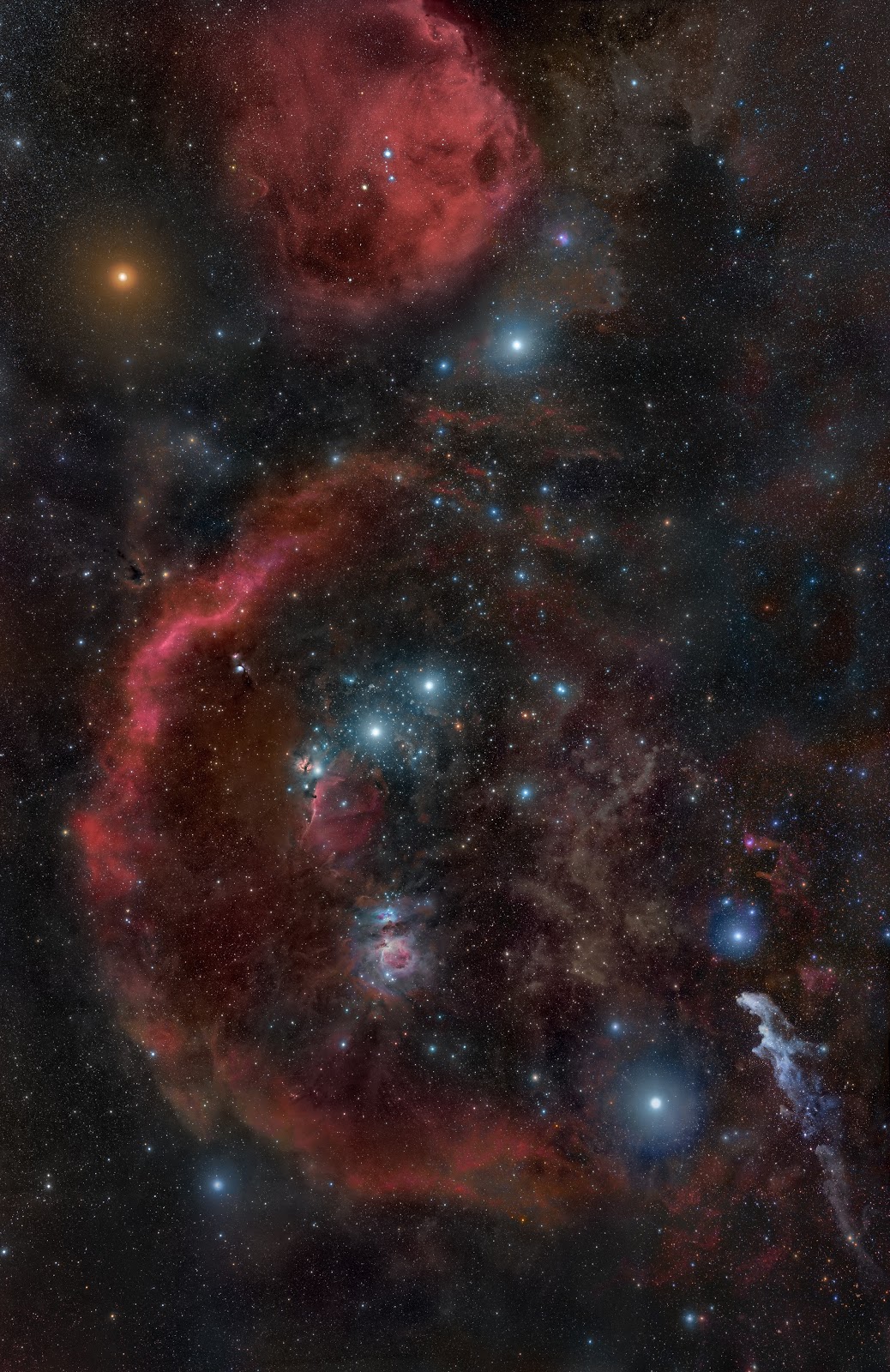 The constellation of Orion the Hunter and surrounding nebulae in enhanced color.  Betelgeuse
is the red/orange star in the top left.  Image credit: Rogelio Bernal Andreo.

This is not the first time that humans have witnessed this star changing though.  Betelgeuse has long been observed with a red color.  Almost two thousand years ago, early astronomer Ptolemy described the color as ὑπόκιρρος (hypókirrhos), essentially translating to “ruddiness.”  However,  just three centuries earlier, Chinese astronomers noted the star as having a distinctly yellow color.  If accurate, this falls in line with our understanding of the stellar evolution of Betelgeuse as it has aged from a yellow supergiant phase into the current red supergiant phase.  Not only has the color changed over time, but the luminosity as well.  Observations have shown minor brightness fluctuations over a ten-year cycle, with larger changes over the course of hundreds of years.  This accounts for Betelgeuse’s long-standing oddball classification as the brightest star in the constellation of Orion.  In 1603, astronomer Johann Bayer noted Betelgeuse’s brightness and classified it as the alpha star in the constellation, thus designating it as Alpha Orionis, and placing Orion’s leg star, Rigel, as the second brightest star, or Beta Orionis.  However, Rigel has been the actual brightest star in Orion in modern times.  This tells us that over the past few hundred years, either Betelgeuse has dimmed, Rigel has increased in luminosity, or perhaps both. 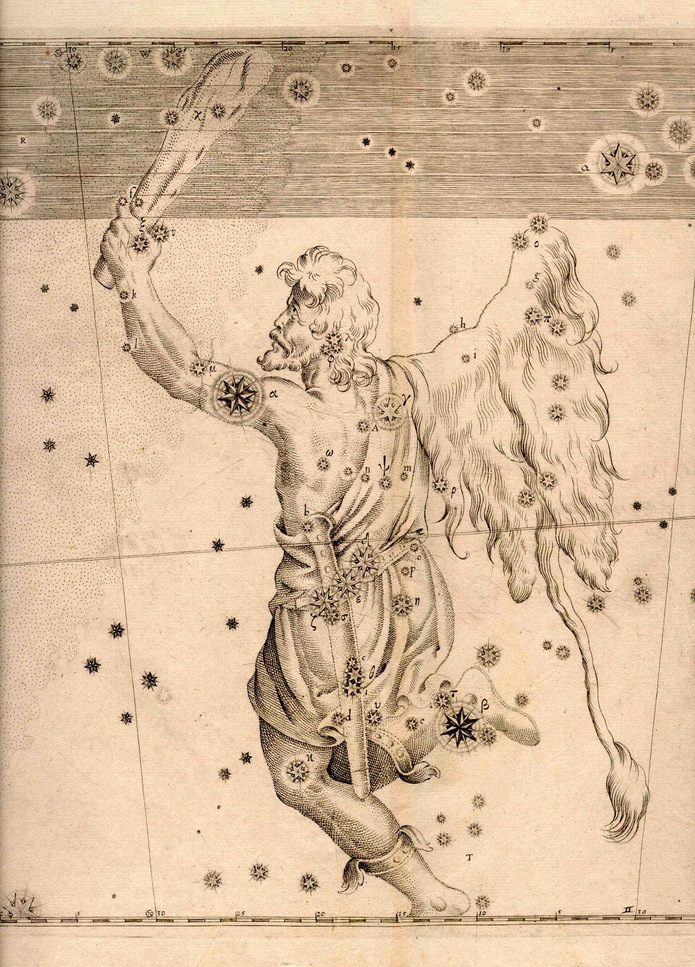 The constellation of Orion with Betelgeuse in his shoulder,as shown in Johann
Bayer’s Uranometria (1603).  Image credit: U.S. Naval Observatory Library.

So while there are no plans to reclassify the stars of Orion, Betelgeuse has now dimmed enough to be the 3rd or 4th brightest star, technically making it Gamma Orionis or Delta Orionis.  Since Orion is a winter constellation, we can even make our own observations right now.  Try it for yourself!  Find Orion rising from the eastern horizon after sunset by first locating his three belt stars.  Then work your way over to his shoulder to find red Betelgeuse. 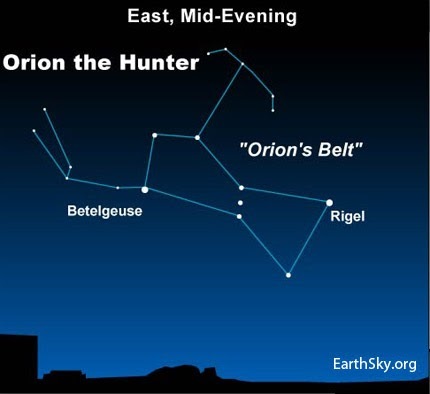 Orion the Hunter rises from the east after sunset.  On opposing sides of Orion’s
Belt are red Betelgeuse and blue Rigel.  Image credit: EarthSky.org.

At this point, it’s helpful to understand that a star exists as a balance between gravity pulling the stellar material inwards and the internal pressures of the star pushing outwards.  When gravity and pressure are equal, the star remains stable, but over time, as fuel burns at varying rates, the star can either expand or contract.  When fuel burns quickly, the internal pressure wins the battle and the star expands.  When fuel runs dry, pressure falls, gravity wins, and the star contracts.  This may be exactly what is happening right now.  After a long period of outward expansion, Betelgeuse’s fuel may be sputtering out.  This lack of burning would, therefore, cause a major drop in brightness.  That’s not the end of the story though.  As the pushed away fuel cools, it falls back toward the star and dumps fuel into the fire again, increasing the pressure, reigniting the star, and restarting the cycle. 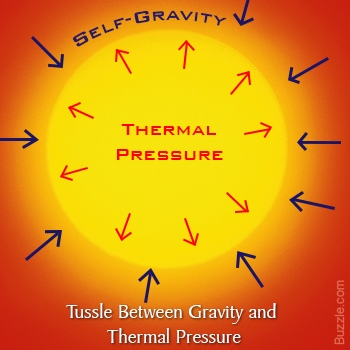 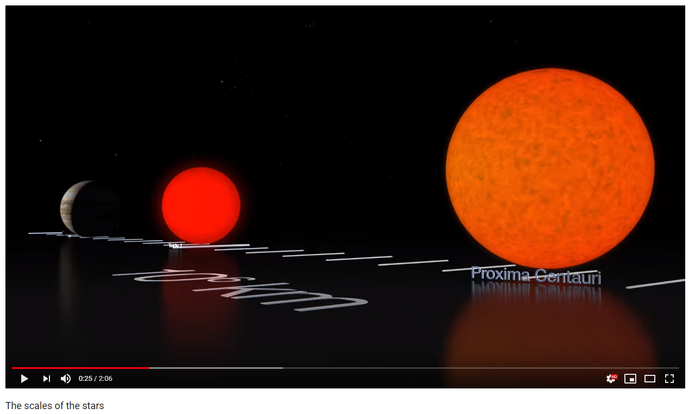 Increased thermal pressure has bloated Betelgeuse into one
of the largest known stars.  Video credit: ESO.org

A far less likely, but more exciting outcome is possible.  Betelgeuse may be on the verge of one of the Universe’s most spectacular events: a supernova.

A star’s fate can almost entirely be known through its size.  The bigger the star, the faster it burns through its fuel.  Our Sun, a yellow dwarf star, is 4.6 billion years old, and about halfway through its life.  Tiny red dwarf stars burn at a low temperature and will last almost forever.  Red dwarfs born at the beginning of our 13.8 billion-year-old Universe have barely even begun their lives, as they will burn for trillions of years.  They burn slowly and steadily.  Giant stars sit at the opposite end of the spectrum.  They are the rock stars of the Universe.  They burn brightly, live fast, and die young.  Betelgeuse is not even expected to last 9 million years.  These highly unstable giants rush through their hydrogen and helium fuel, eventually leaving a void in the center of the star.  In a matter of seconds, the outer shells of the star sprint to fill that center, colliding and rebounding in one of nature’s most spectacular events: a core-collapse (or Type II) supernova.  The suddenly compressed matter reaches temperatures of 100 billion kelvins before it races outward into space at over 67 million miles per hour. 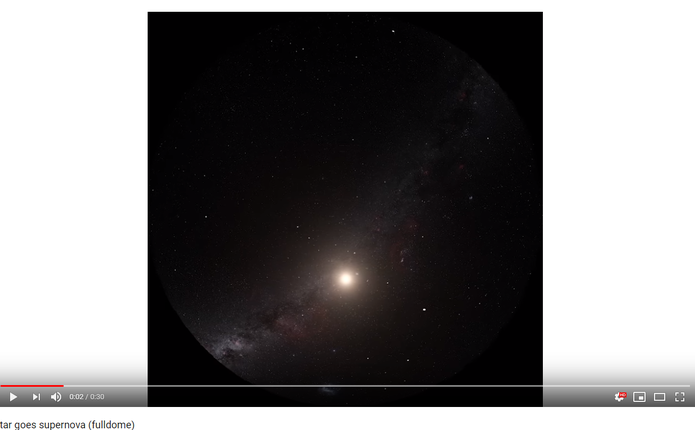 This video simulates a supernova from a massive star.  Notice the size compared to the other stars.
The exploding, expanding shell of stellar material would wipe out nearby star systems for light-years, in all directions.
Don’t worry about Earth though, we’re outside of the blast radius.  Video credit: ESO.org.

Another interesting possibility to consider is that Betelgeuse may not even be in space any longer.  That’s a very strange thing for me to say, isn’t it?  Well, because of how far away this star is from Earth, about 700 light-years, that means any light we see from it in the night sky is 700 years old, and therefore, we are on a time delay.  We are seeing Betelgeuse as it was in the time when Marco Polo introduced himself to Kublai Khan in China.  It is possible that Betelgeuse has exploded already, and we are waiting for the light from that blast to make the very long trip across space and time, where we can see it here.  Likewise, if Betelgeuse did go supernova today, we wouldn’t know about it until far into humanity’s future, around 2720 AD.  If the supernova does happen within humanity’s lifetime, it would be quite the fireworks display, and probably the news story of the century.  It would be as bright as a full moon and would last for at least a week, possibly up to a month, and visible even during the day.

Adding to the excitement, on January 14th, LIGO detected a burst of gravitational waves (/Gravitational-Waves-from-Space-Make-a-Big-Splash-in-Astronomy-1-32.html), the likes of which come from high energy objects, such as black holes, neutron stars, and supernovae.  Data indicated that the wave came from the same general direction as Betelgeuse!  Is this it?!  Is it happening?!  Upon receiving the text alerts, some astronomers even reported spilling their coffees as they ran outside to see if there was a new bright spot in the sky.  Alas, it turned out to be from an unrelated event and pure coincidence.  No bright spot; no supernova.   ...Yet.

Will we see a supernova from Betelgeuse?  Probably not.  If it is to explode some time over the next 100,000 years, then the chance of it happening on any given day are 1 in 36,525,000.  Those are pretty bad odds, but we can still hope.  The odds of winning the lottery jackpot are about 1 in 300,000,000, and people win all the time.  What will be the fate of the red supergiant star?  Will it remain in its dimmed state?  Will it return to its former glory in our night skies?  Or will we witness something even greater?  We’ll just have to keep looking up to find out.

Weather permitting, join the Lohman Planetarium staff in the MOAS Courtyard at
MOAS After Hours on January 27th [5:00-7:00PM] to observe Betelgeuse and the winter sky. 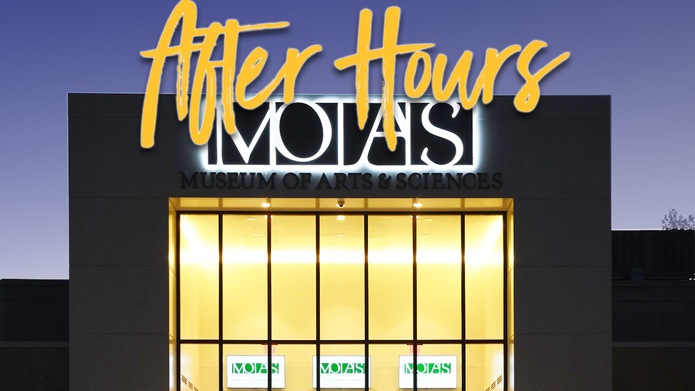