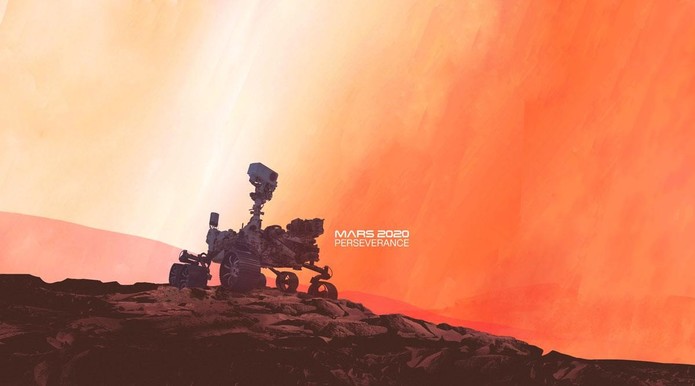 A new scientist is about to start exploring the solar system.  While it doesn’t have any life signs of its own, it will be searching for the faintest hints of once-living material in our next door neighbor planet Mars.  The Mars 2020 Rover, now officially named Perseverance, will venture away from Earth on a seven-month journey across space.  Its destination: Jezero Crater, a dry and ancient Martian lakebed, which may hold the remains of life in layers of rich clay, dating back over 3.5 billion years.  Over a planned mission duration of 668 sols (Martian days), the rover will investigate the biological history of the Red Planet and demonstrate key technology to aid in achieving our ultimate goal of human exploration on Mars. 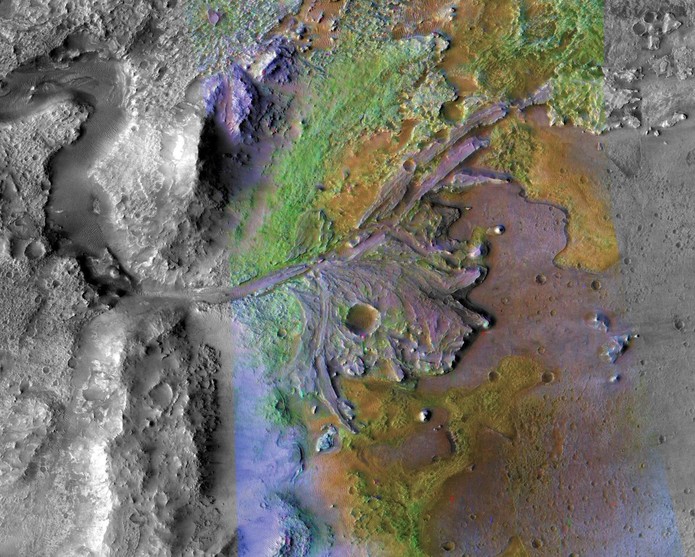 A color-enhanced image of the delta in Jezero Crater, which once held a lake. Ancient rivers ferried clay-like minerals (shown in green) into the lake, forming the delta. Clays tend to trap and preserve organic matter, making the region an ideal place to look for signs of archaic life.  Image credit: NASA/JPL/JHU-APL/MSSS/Brown University 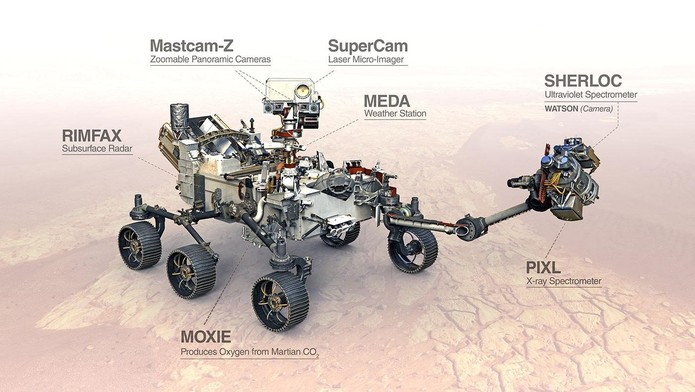 Powered by a nuclear fuel source, Perseverance is slated to run through sunshine and dust storms for a mission duration of 668 sols.  If it’s anything like its predecessor, the Curiosity rover, it will operate far longer.  With the same power source, Curiosity was also scheduled for 668 sols, but has been running since 2012 and is approaching 3,000 days of continuous operation.  Curiosity has allowed designers to learn a great deal from its successes, as well as discover opportunities for improvement.  Among other advancements, Perseverance received an upgrade to the wheels, which have suffered greater than expected damage during Curiosity’s time in the rugged Martian terrain.  The new wheels are composed of thicker, more durable aluminum, along with cleats for traction and titanium spokes for springy support.  With each new generation of lander on Mars, NASA continues to improve upon previous designs. 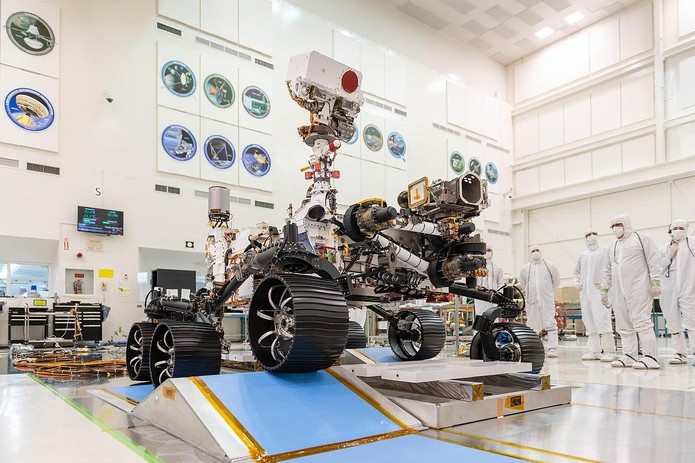 During its investigative journey, Perseverance will also create small packages of Martian surface material, with the hopes of retrieval by NASA on a future robotic mission.  This Sample Caching System will give us the first pristine specimens ever retrieved from another planet.

Among the most complex robotic systems ever built, the Sample Caching System will collect core samples from the rocky surface of Mars, seal them and leave the priceless cargo for a future mission to return to Earth.  Video credit: NASA/JPL-Caltech

Perhaps the most exciting aspect of the multi-faceted mission will be the inclusion of a sidekick for Perseverance, the Ingenuity helicopter. Ingenuity is a small, 4 lb robotic helicopter that will scout the Martian terrain by hovering 16 feet above the ground and venturing out on sorties of about 300 yards at a time, for a total of five flights.  The overhead images produced will have ten times the resolution of images taken by satellites in orbit.  Such reconnaissance should help future rover missions cover three times as much terrain per day.  As the first object to ever lift itself off the surface of Mars, Ingenuity will also serve as a proof of concept for powered flight on another planet.

Ingenuity will hitch a ride on the belly of Perseverance until it is time for the maiden flight.
Video credit: NASA/JPL-Caltech and Lockheed Martin Space

NASA devotes a large amount of resources and time to interacting with the public.  As a NASA Solar System Ambassador myself, I receive information and resources straight from the scientists on this mission and others.

The Solar System Ambassadors Program of NASA’s Jet Propulsion Laboratory offers information and excitement about real missions that explore our solar system.  This highly competitive program only accepts applications once per year, which are then vetted by NASA JPL staff for applicants with the right combination of presentation experience, motivation and ideas for community engagement events.  Ambassadors are given exclusive training on NASA missions, both manned and unmanned, from scientists and astronauts, before taking what they have learned and creating engaging events in their local communities.  Volunteer ambassadors in communities throughout the country are selected by JPL based on their backgrounds and on their plans for public outreach activities. JPL provides ambassadors with educational materials and training. Further information about the Solar System Ambassadors Program is available at solarsystem.nasa.gov/ssa.  JPL is a division of the California Institute of Technology in Pasadena, California. 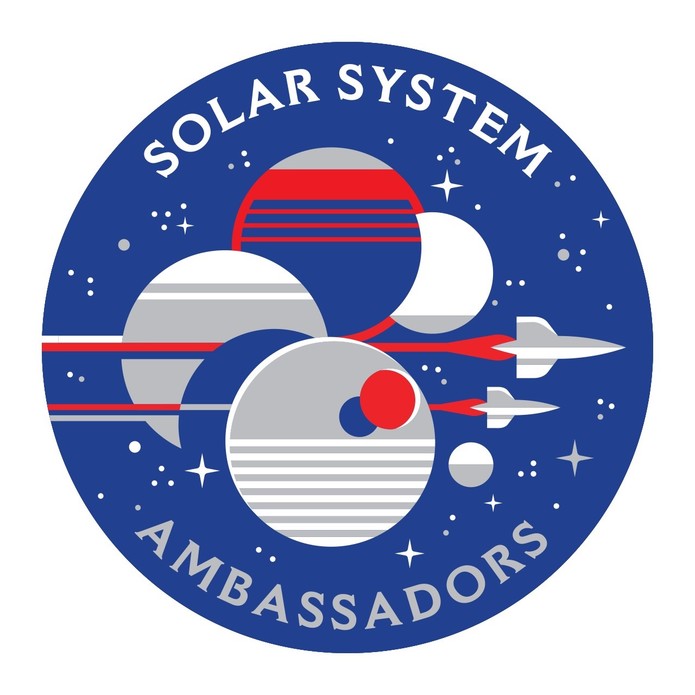 Even the naming of the rover has been an interactive event.  Last year, NASA launched a student naming contest and received over 28,000 submissions from K-12 students in every state.  After narrowing the field to nine finalists, seventh-grader Alex Mather read his winning essay and announced the new rover name to an eagerly awaiting crowd.

You can also participate in space exploration by sending your name on a future Mars mission!

After launching aboard an Atlas-V rocket from Cape Canaveral, Perseverance and Ingenuity will traverse roughly 314 million miles of open space and arrive at Mars on February 18th, 2021.  Due to the orbital positions of Earth and Mars, the mission must be launched no later than August 11th.  Otherwise, we would miss our window and have to wait until September of 2022 for the correct planetary lineup again.  Despite difficult and chaotic world events, crews at NASA and JPL have been working tirelessly to meet the launch date. 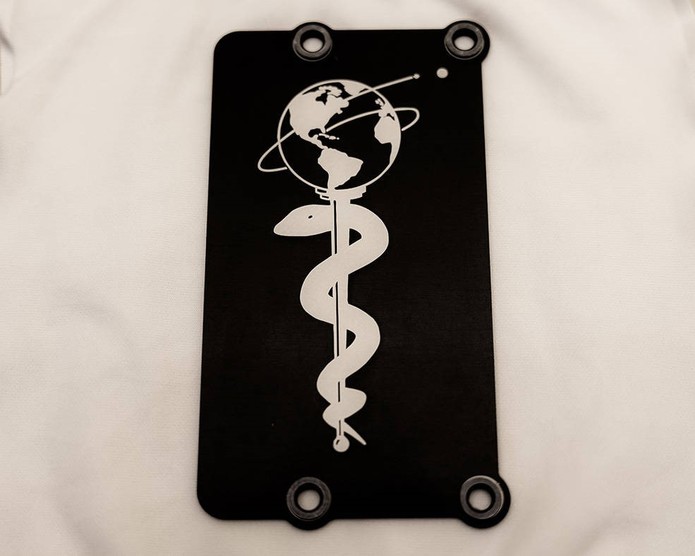 Attached to the Perseverance rover, this 3-by-5-inch aluminum plate commemorates the impact of the COVID-19 pandemic and pays tribute to the perseverance of healthcare workers around the world.  Image credit: NASA/JPL-Caltech

The Mars 2020 mission will face enormous challenges, from the rocket launch, to traversing millions of miles of space, to the “Seven Minutes of Terror” of decelerating from 13,000 mph to zero while descending to the Martian surface, to safe deployment of the vehicles and completion of the mission objectives.  Perseverance, Ingenuity and the thousands of scientists and engineers involved are prepared for the task.  Even in arduous times, science marches forward.  The show must go on.  We persevere.

Perseverance is currently set to launch on July 30th at 7:50 am.  You can watch on nasa.gov/nasalive or youtube.com/nasa.  Coverage begins at 7:00 am.  Visit mars.nasa.gov/ for more information.

Questions or comments?  Email me: jason@moas.org